Queen Margaret University needed an app they could use in remote locations to interview refugees. Using the app, researchers can create studies and assign questions to each study. 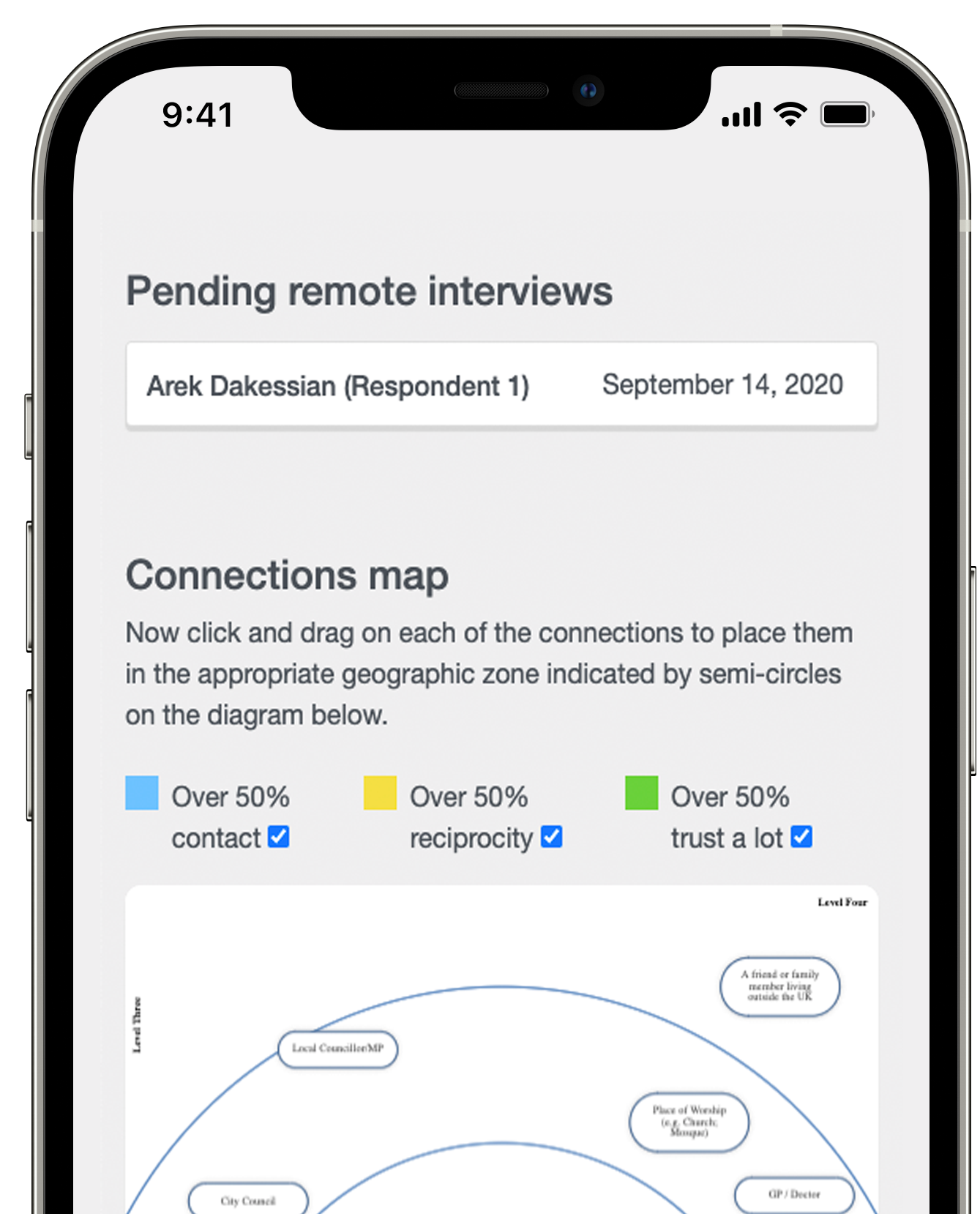 The Institute for Global Health and Development at Queen Margaret University approached Bad Dinosaur in 2018 with a plan to build a unique digital research tool that would help streamline the collection of both qualitative and quantitative data from their project assessing the social engagement and integration of refugee populations in various countries around the world. The tool would ideally be able to record, report, aggregate, and display both quantitative and qualitative data, and be adjustable for use in different geographical regions.

From a broad perspective, the simple solution appears to be that of digitising a manual process, but when you consider the fact that the research tool’s primary use would be in collecting data from across the globe, working with people from different cultures, using different languages, and connecting through differing levels of internet accessibility, it quickly became a project in need of a variety of tailored solutions.

For the many people who have spent their lives in a politically stable country, it is easy to take for granted the various social connections one relies on in day to day life. Whether it’s chatting with a friend, a visit to a doctor’s office, a phone call to your local police station, or attending a service at your place of worship, there is a level of inherent dependability placed within institutions and individuals simply because it is something one has grown accustomed to.

Settling in a new country, however, means rebuilding a level of trust and willingness to engage with such individuals and institutions, a process that is intrinsic to adapting to life in a new location and culture. In order to ensure that this is effectively taking place or to make the necessary changes, a certain amount of participatory research must happen, in which individuals report their level of engagement via various surveys and activities. This form of research has been a major part of the work done by Dr. Alison Strang and the team in the Institute for Global Health and Development at Queen Margaret University, who specialise in collecting, analysing, and comparing data from different regions and populations in order to aid in the settlement of refugees.

Working as academic researchers in the humanitarian sector as well as directly with refugee populations in the UK, the team have long recognised that engagement in social networks is a key indicator of the well-being of a given population. But in order to monitor, collect, and assess the level of engagement, it is first necessary to have dependable data that can be collected in ways that aren’t overly burdensome on communities that are often already dealing with many difficulties in their lives. 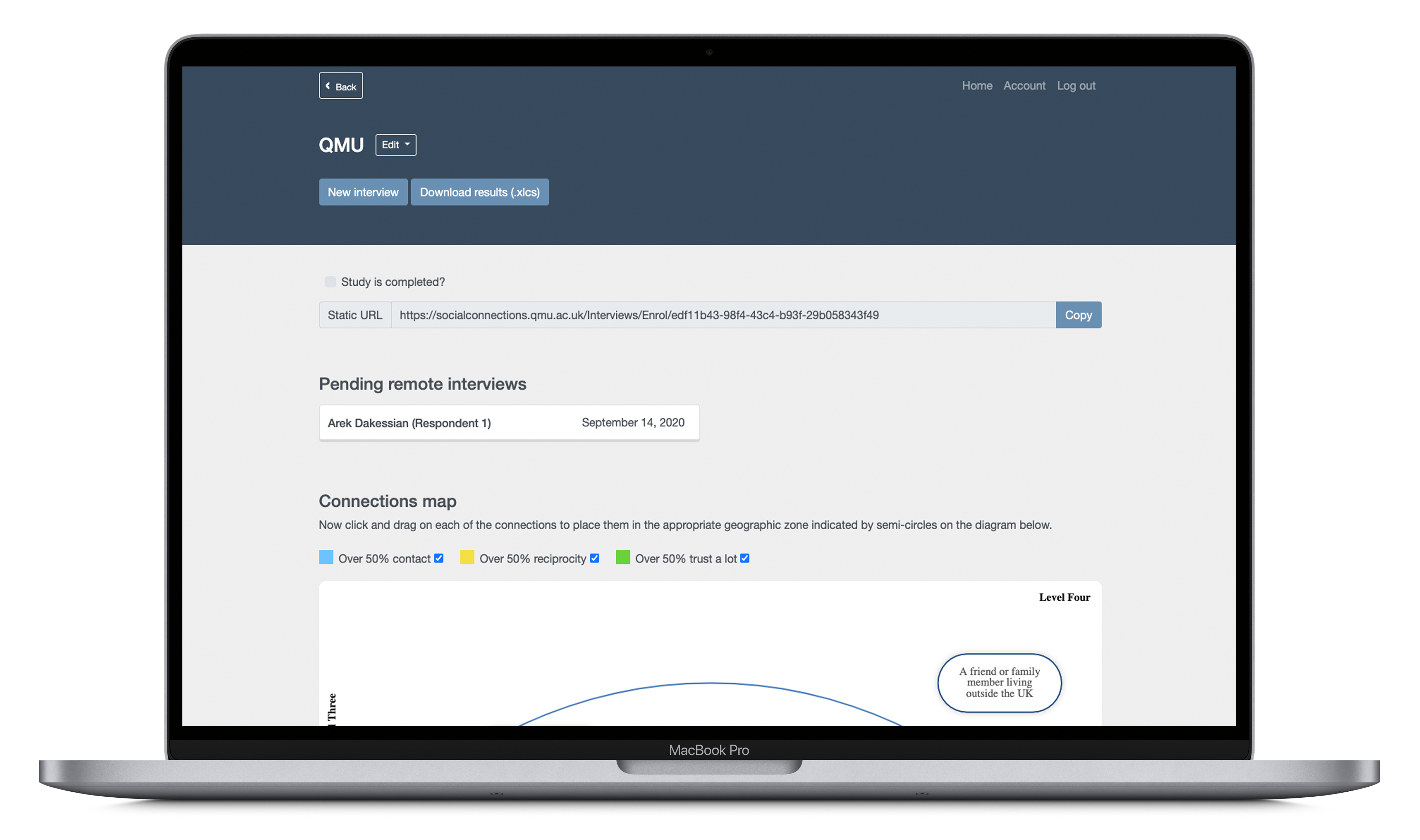 In order to effectively look at social connections, we need to be able to base our research on the local context, understanding what needs people have, what needs are and are not being met, and understanding how these change over time. Similarly, in order to better understand the data and consider possible solutions, we must be able to compare it to populations across different geographies—for instance, beginning to understand how and why a given population in Glasgow is only half as well connected as a given population in Somalia. 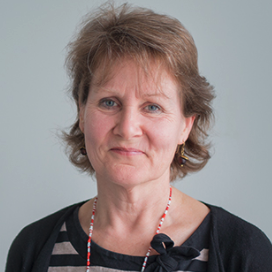 Having previously depended on a variety of manual and face-to-face processes, the team at Queen Margaret understood that the most effective approach to gathering such data from across the globe would be to create a digital research tool that was streamlined, adaptable, dependable, and accessible. 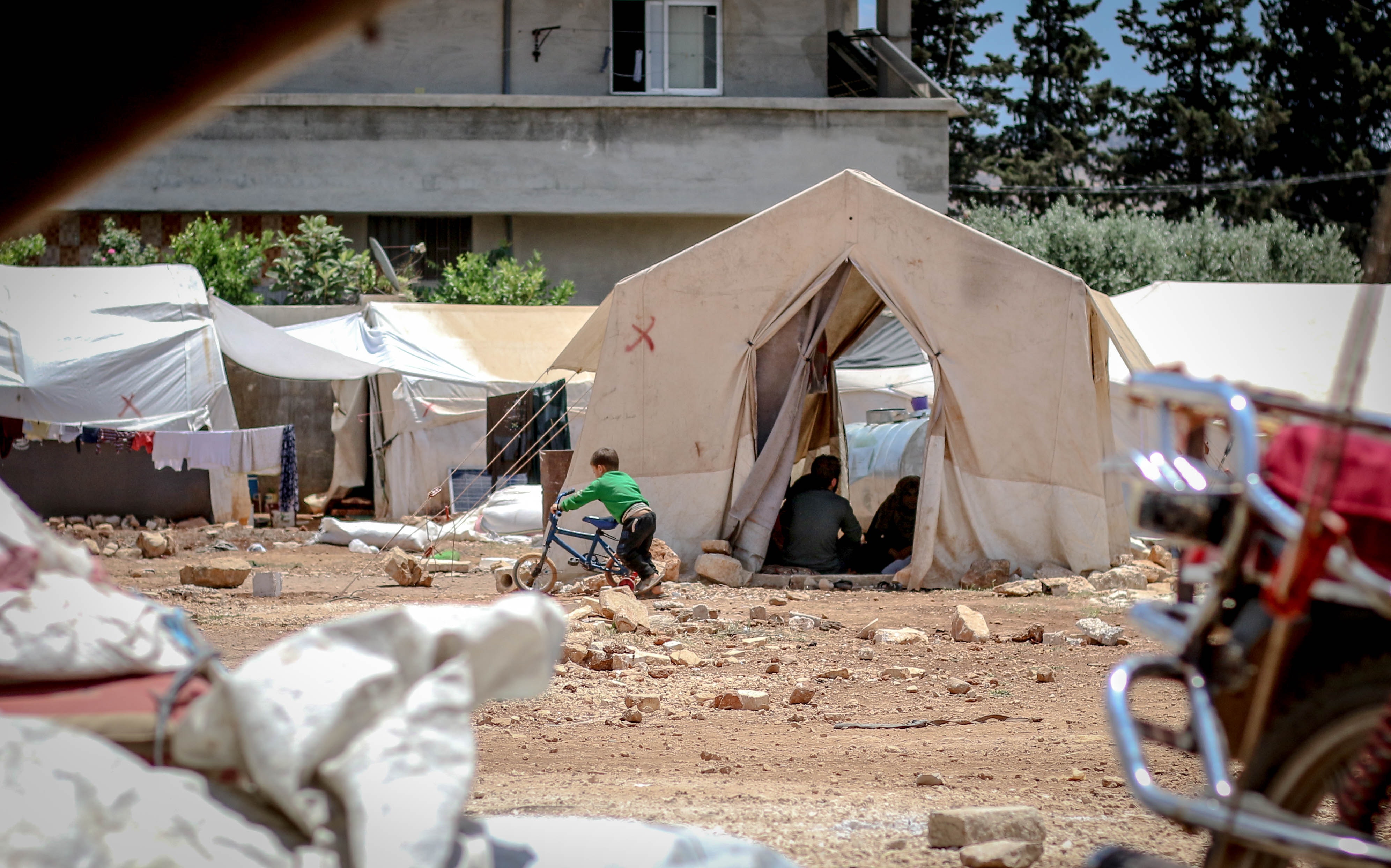 Working in an academic setting with a variety of funding parameters meant that Dr. Strang and the team at Queen Margaret University approached a handful of potential development firms in order to assess the best and most cost-effective way forward. Also, having spent the previous ten years as part of a professional online network she set up with a colleague in Sri Lanka, Dr. Strang had gained experience working with developers and knew what she was looking for. Fortunately, her vision and expectations were well matched by the team at Bad Dinosaur.

I am all too aware of the problems that arise when trying to bridge the gap between the vision of the customer and what can often be an impenetrable, techy-language used by developers. I know how important effective communication is in these situations. When Bad Dinosaur talked to us about their process, outlining how their workshops involve an I.T. developer, a designer, and project manager meeting regularly to consult with the client, going from vision, to user stories, and onward; I found myself very impressed with the process. Throughout the project we always felt there was an important level of transparency, commitment, and continuity with the same developer and designer, which has been extremely helpful in allowing us to stay solution focused and on track.

How did we design it?

Following an in-depth workshop, the teams from Bad Dinosaur and Queen Margaret University decided that the Social Connections Mapping Tool would be an application that can deliver specifically tailored research interviews and surveys digitally.

Originally, these were meant to be completed by participants with the help of an interviewer or a support worker, but following the COVID-19 outbreak it became increasingly evident that a solution to allow for self reporting was necessary, so the app was re-engineered to allow access via unique and secured, tokenized links that could be sent to and accessed from locations across the globe. This meant that participants could complete the surveys by themselves, in their own homes. The data would then be uploaded to a cloud database upon connecting to the internet, where it would be concurrently accessible for multiple users. 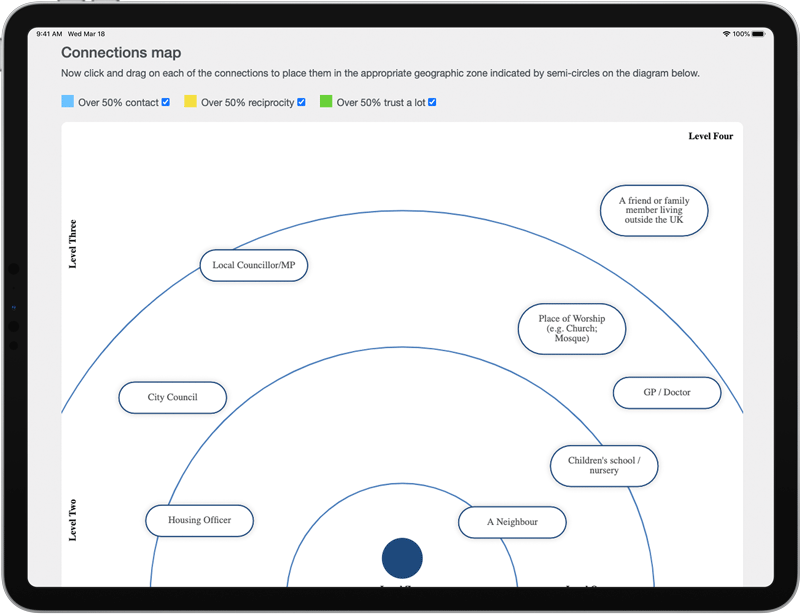 When it was decided that the application would be used remotely, we had to begin accommodating for a variety of barriers that weren’t present in the original iteration of the app. The major change was to utilise PWA (progressive web app) software in order to make the app usable offline, as it is likely to be accessed in regions where internet connections can be spotty. Then, because there would not always be researchers and coordinators present to help with translations, the app was also programmed to easily adapt to use in any language. 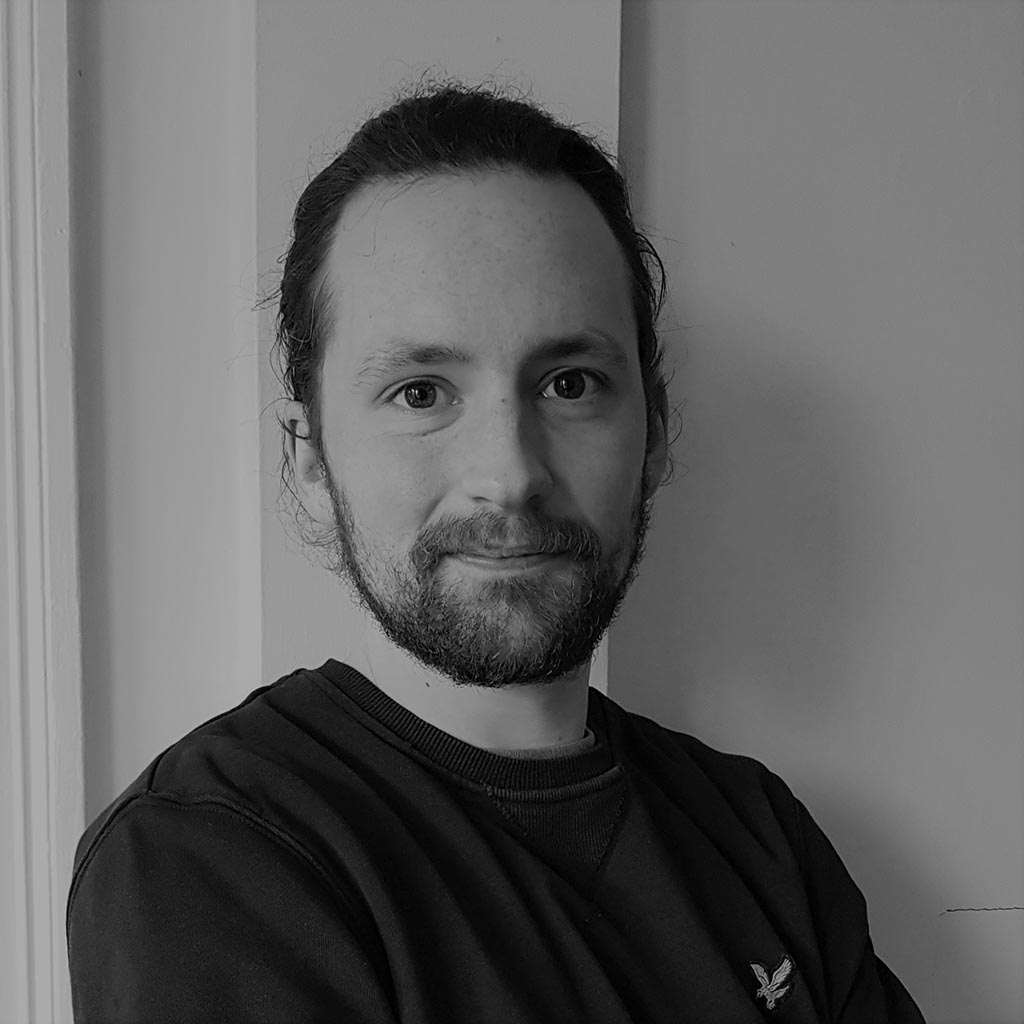 In fact, one of the most unique aspects of designing the Social Connections Mapping Tool application was creating a user interface for a global audience, which meant utilising various simplified symbols to allow for the easy navigation of pages, as well as for responding to certain sets of survey and interview questions.

Similarly, as an equally important aspect of this research extends beyond data collection to aggregation, analysis, and comparisons, it was also vital that the application included a tool for both numerical and visual representations of results. The data analysis output is programmed to include not only raw and aggregated numerical data, but to also produce a Social Connections Map that provides a colour coded visual overview of each study, helping with both analysis and case comparisons. Whilst the scope of the initial project was to identify the frequency and strengths of social connections within a participant's community, the framework and software is easily applicable to any number of investigative projects. The application of the questionnaire and data visualisation functionality could be applied to any field where research involves data gathering from individuals. 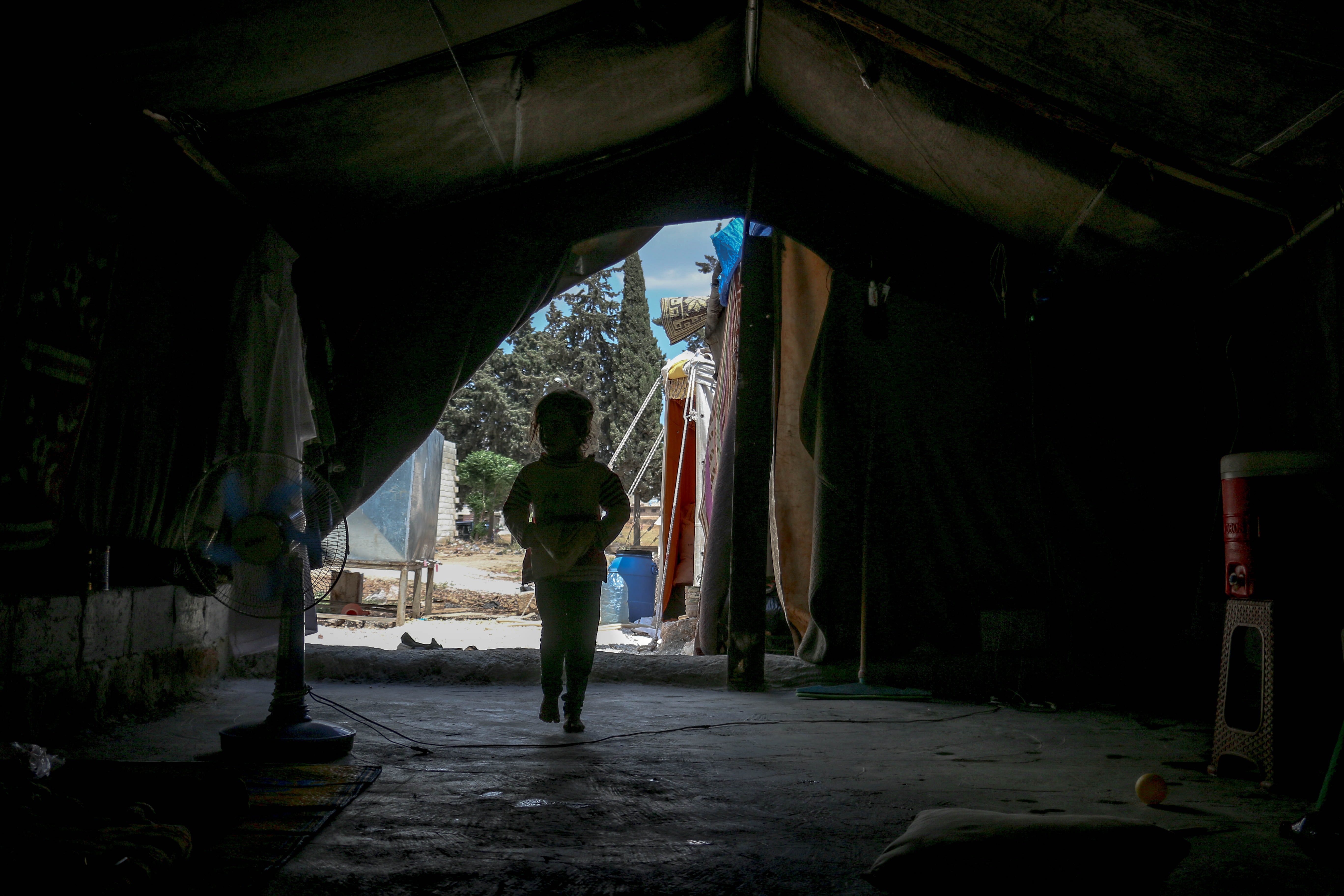 Moving into the Future

Recently, the tool was used by a humanitarian agency in Kurdistan in order to map the use of local resources, and it was reported that the Social Connections Mapping Tool allowed them to gather and analyse significant in-depth data in a space of time that would have previously been impossible with the use of more manual and face-to-face processes.

Also, in the near future, it is exciting to share that Dr. Strang has informed Bad Dinosaur that the Scottish Refugee Council have received European funding that will be used in part to incorporate the Social Connections application into their case management system. On another front, the application will also soon be used in an upcoming research study across four African nations—Kenya, Democratic Republic of the Congo, Somalia, and South Africa—to assess access to healthcare, specifically amongst displaced populations.

Meanwhile, at Bad Dinosaur, we are keen at the prospect of continuing to work with Dr. Strang and the team at Queen Margaret University as they continue to find new and innovative ways to utilise the Social Connections Mapping Tool.