Fanbase is a comprehensive mobile platform for booking and attending sports matches, uniting clubs and their fans through the latest mobile technology.

All businesses, from start-ups to the world’s largest sports clubs, work tirelessly in their attempts to foster a family atmosphere where sta, clients, and fans will always feel valued. But to build such a tight-knit organisation takes something special, so perhaps that’s why it was two sports-loving brothers who came to Bad Dinosaur with their project for Fanbase, a unique platform that unites sports clubs and their fans.

Brothers in business: the story behind Fanbase 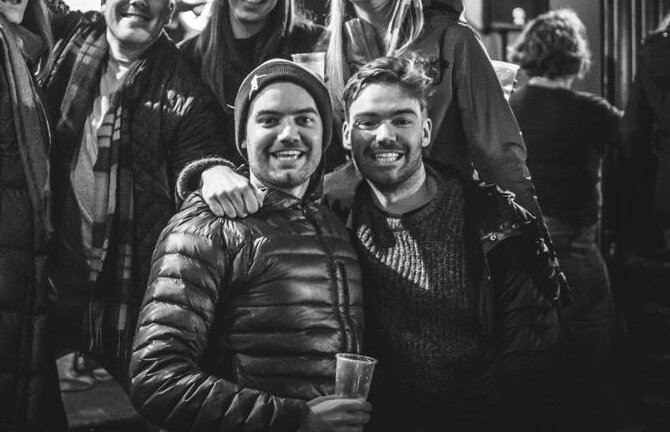 Part of being in a family is knowing that no matter how far apart you might be geographically, you’re never truly separated from those you care most about. In 2015, Ali and Michael, brothers who had spent the better part of the previous decade living in separate cities—from London and Edinburgh, to Sydney and New York—found themselves on holiday in Basque Country, enjoying the local food and lamenting the lack of time they spend together.

It was then and there, over plates of pintxos (the Basque answer to tapas) that the two decided to start a business—if for no other reason than the fact that it would force them to reunite once a year for their annual general meeting.

Upon their return to the UK the pair quickly realised that their holiday plans of starting a pintxos restaurant might have been one of those ideas cooked up in the heat of wanderlust, but with a few other possibilities in the works the pair decided to incorporate anyway under the name of Pintxos Brothers.

A year later Ali and Michael were in Dublin for their first annual general meeting, and being lifelong athletes and sports fans it was decided the company activity would be a trip to the AVIVA Stadium to watch the Georgia Tech Yellowjackets take on the Boston College Eagles in a classic American college football showdown, which started them thinking about the business of sport.

The following summer of 2016, while the pair were working and playing for rugby clubs in the UK, they began to notice the chasm that existed between their clubs’ current outreach to fans and what might be achieved with the proper resources for managing and utilising data to keep in better touch with supporters.

Asking around the industry, they quickly discovered that clubs throughout all sports and tiers of play appeared to be lacking essential information and data on fans—When did they last attend a match? What products might they be interested in? Where do they live? How long have they been a supporter?—all of which could be used to help create the type of tailored experiences that allow fans to feel both unique and essential to their club. It was then that the wheels started turning for Pintxos Brothers, and the concept for Fanbase was soon born.

The creation of the Fanbase platform

Following an intensive year of research that involved conversations with a variety of sports clubs, including some of the biggest names in Scottish and English Premier League football, Ali and Michael began to discover that, while clubs may talk-up their close relationship with supporters, they often struggle to paint a proper picture of who those people really are.

For fans, this distant relationship can be both tiring and ostracising, especially when many have spent their whole lives supporting their club. The answer was obvious: the key to Fanbase would be in the development of a platform that would allow clubs and fans to come together through the proper management of data and today’s easy-to-use communication tools.

After months of Skype calls, pitches, and meetings in search of a software developer that matched the ethos of Pintxos Brothers, Ali walked into the oces of the tech incubator, Codebase, who recommended that he head over to Bad Dinosaur, which turned out to be a ten minute walk from his Edinburgh home. Both Ali and Russ (Director of Bad Dinosaur) knew immediately that they were a perfect fit.

“I met Russ and thought, thank God, this is finally exactly what I’ve been looking for.”

“I feel like we found each other at just the right time in the project, and I felt we had that perfect team fit with Ali and Mikey from the start.”

Russ was excited to see the in-depth research that Ali and Michael had conducted, and was impressed by their understanding of the MVP (minimum viable product) methodology—a more affordable and strategic product containing the types of features that will satisfy early customers and stimulate future growth. Also, the inroads the brothers had made into connecting with their target market and commercialising their product were some of the signs of success and dedication we at Bad Dinosaur look for when deciding whether or not to take on a new project.

Pintxos Brothers and Bad Dinosaur began development on the interface prototype for the Fanbase platform in mid 2018, focusing specifically on increasing interaction between sports fans and their club. As with all start-up projects, the road to creating Fanbase was not always a smooth one, but fortunately Ali and Michael were both used to sacricing, committing, and working hard to get things done right, something they took from their years on the rugby pitch. This determination to achieve the best end product possible was something the team at Bad Dinosaur consistently admired and reciprocated throughout the project.

“When we did come across any bumps in the road, Ali and Michael were always willing to compromise, they were always decisive and kept the product moving forward. Every meeting was really positive, and you could tell they had both a deep understanding and a real passion for what they were trying to create.”

Similarly, for Ali and Michael, the development process with Bad Dinosaur was a positive one based on an openness that allowed them to make the best possible decisions for their business. The brothers knew the investment of time and money were always going to be a part of the highs and lows of the development process, but the frankness of Bad Dinosaur’s advice was something that helped them make some of the dicult choices that eventually led them to where they are today.

“A particular high was when Mikey and I had put some of our savings into a clickable prototype, and that was probably our second best moment, as Lindsay at Bad Dinosaur had taken everything we had in our heads and put it into something we could use, and that was a serious wow moment. But that was quickly followed by our work with Russ and Nicky where we decided what was needed to make the first full version of Fanbase the best it could be, and that was, well, a very different kind of wow moment.”

So where are things now?

By the end of 2018, Bad Dinosaur had completed the interface prototype for the Fanbase platform, and in early 2019 the two teams began weekly focus meetings to develop the MVP. These meetings allowed Nicky, Bad Dinosaur’s longest standing developer, to thoroughly brief Ali and Michael on the technical aspects of the project, providing essential feedback to the brothers in order to streamline the process.

“I absolutely love sport, and so when the opportunity came up for me to work on the Fanbase project I basically demanded to be a part of it. The meetings we had together made my job easy, as Ali and Michael really understood the value of focusing on the platform’s essential features.”

For the brothers, the weekly Friday meetings at the oces of Bad Dinosaur not only allowed them to get thorough answers to any technical questions they might have, but it also allowed them to have an influence on the development process, providing the platform with the feel the two had envisioned.

“The sessions were always focused, we left with very few questions or things to follow up with as we usually got through it in the session. I think it was due to the fact we were very clear on what we wanted and Nicky was very specific in the questions he needed answered.” -- Ali

As of today, clubs can manage fan data, sell digital tickets to fans that can be used to enter the stadium, provide digital rst upgrades to sponsorships and hospitality. There’s also a lot more exciting features to come as Fanbase moves beyond MVP.

This summer, three years after their rst annual general meeting in Dublin, Ali and Michael will be having their AGM together in person, as was always intended, and will be doing so o the back of supporting their first ever match between Scottish professional football clubs Hibernian FC and Linlithgow Rose. The match functioned as a highly successful pilot event for Fanbase, and allowed them to view the platform in action and gather valuable feedback from fans.

“I surprised myself as to how calm I was on the day. We had a team of 6 there on the night, 3 superb interns at Fanbase, myself and two members of Bad Dinosaur. We knew they were coming down but to have them there really set them apart in my mind from any other agency or developer I’ve worked with. And the team at Linlithgow have an exciting vision for their club to become a truly engaged and community driven outfit, so we’re delighted to be shoulder to shoulder with them on that journey."

Looking forward, Ali and Michael have big plans for Fanbase, and view further developments as an opportunity to combat the growth of sedentary lifestyles by helping sports clubs engage with their local communities, and encourage sport and active lifestyles through both digital and face-to-face conversations.

Meanwhile, we at Bad Dinosaur are celebrating a move to our new office at Sugar Bond in Edinburgh, where we’ll be raising a glass to the success of Ali and Michael, who will continue to be a part of the Bad Dinosaur family.

Five questions you should ask yourself about your app idea

When you first get an app idea and decide that you want to start working on it, you might feel that it’s solid and well thought out. This feeling of security normally evaporates as soon as someone starts excitedly asking you questions about it. That doesn’t mean that it’s a bad idea, though, simply that you need to think about how your idea will work in the real world.

What we're doing to address the diversity challenge

A round-up of the actions we're taking when recruiting in order to foster a more diverse and inclusive team.